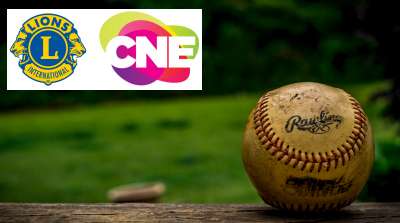 Founded in 1954, the Lions-CNE Peewee Baseball Tournament is the oldest and most prestigious event of its kind in Ontario. Thirty-two teams of Toronto and southern Ontario 12- and 13-year-olds compete over 8 days.

From the CNE web site:

For more than half a century, young people throughout Southern Ontario have risen in the early hours of the morning to journey to the Canadian National Exhibition and compete for the coveted championship of the Lions-CNE Peewee Baseball Tournament.

The excitement of a competitive ball tournament and a day, or four, at the Exhibition is always a summer highlight for thousands of youngsters and their families.

This tournament is the longest-running attraction at the CNE. Former players include hockey stars Wayne Gretzky and Ken Dryden, baseball stars Joey Votto and Josh Naylor, and distance runner and Olympian Bruce Kidd.

SCGM Lions are proud to be one of several area Lions Clubs that have regularly supported the Lions CNE Peewee Baseball Tournament for many years.

Manage Cookie Consent
To provide the best experiences, we use technologies like cookies to store and/or access device information. Consenting to these technologies will allow us to process data such as browsing behavior or unique IDs on this site. Not consenting or withdrawing consent, may adversely affect certain features and functions.
Manage options Manage services Manage vendors Read more about these purposes
View preferences
{title} {title} {title}