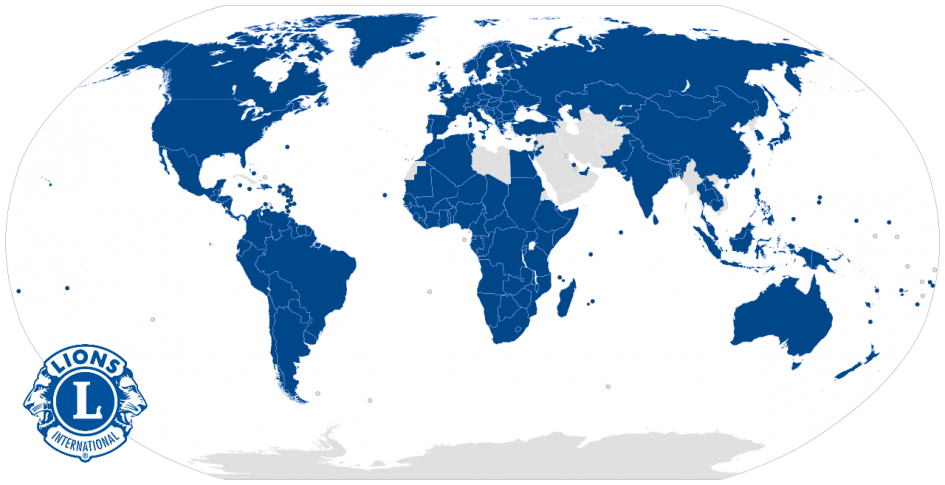 The first Lions Club was founded in 1917 in Chicago. The organization became “International” in 1920 with the founding of a club in Windsor, Ontario. In 1925, Helen Keller dropped in to the LCI annual convention. She challenged Lions to become “Knights of the Blind”. Those short words established a tradition that remains strong today. Along with Hunger Relief, Diabetes, Pediatric Cancer, and the Environment, Vision is one of LCI’s five key service areas.

Each club chooses and runs its own fundraising and service projects.

All the money that comes in must go out again. It’s a rule. Every Lions Club is required to return 100% of funds raised from the public to causes of the club’s choosing.

LCI’s charitable arm is the Lions Clubs International Foundation (LCIF). Founded in 1968, LCIF awards several types of grants, including disaster relief, SightFirst, and Core 4 Diabetes. Millions of people around the world have benefited through more than 13,000 Foundation grants, which have totaled more than US$1 billion.

LCIF’s chief source of income is the Melvin Jones Fellowship. Clubs have the opportunity to recognize achievements and contributions of individual Lions or members of the community by funding a MJF. The award is named for LCI’s founder.

Some LCIF accomplishments from fiscal year 2015-2016 include:

LCI has partnered with The Gavi Alliance and the Bill and Melinda Gates Foundation to further the measles vaccination work, committing to raising US$30 million.

Lions Clubs International are the global leader in humanitarian service, with over 1.4 million members in 200 countries around the world.

SightFirst investments have also been critical in helping the governments of Colombia, Ecuador, Guatemala and Mexico eliminate onchocerciasis (River Blindness) transmission as well as significantly reduce the impact of the disease in Cameroon, Ethiopia, Mali and Uganda.

If you would like to feel better, get in touch with us. Or read a little more about being a Lion.

Each new Lion helps us help 70 more people. So we would like to talk to you, too.

A Lion since 2010, with service experience roles in clubs, district and multiple district.

Manage Cookie Consent
To provide the best experiences, we use technologies like cookies to store and/or access device information. Consenting to these technologies will allow us to process data such as browsing behavior or unique IDs on this site. Not consenting or withdrawing consent, may adversely affect certain features and functions.
Manage options Manage services Manage vendors Read more about these purposes
View preferences
{title} {title} {title}